On November 13, when the early winter was warm, in order to promote the construction of company culture, the company launched a "Happy 4-day trip to Jiangxi" activity. Thereby the whole staff of the company embarked on a cheerful trip to Jiangxi.

Company culture is the soul and essence of an enterprise, and the motivation and source for enterprise development. Team building activity can not only relax our physical state and mind, but also promote the sincere cooperation and friendly relationship between employees. Meanwhile team building also can promote the realization of corporate goals successfully. The most important thing is how to integrate team spirit into tourism activities based on the company's care for employees. More importantly, it is to create an atmosphere of unity, cohesion, and progress for all employees. On the morning of the 13th, we went to the railway station joyfully. Amidst laughters, we arrived at the first stop of the tour—Wuyuan County, before noon.

Wuyuan County, one of the six ancient Huizhou counties, is now a county under the jurisdiction of Shangrao City, Jiangxi Province. It located in the northeast of Jiangxi Province, at the junction of Jiangxi, Zhejiang and Anhui provinces, the geographical position is extremely advantageous. The representative culture of Wuyuan is Huizhou culture, known as the "Hometown of Books" and "Hometown of Tea". It is a well-known cultural and ecotourism county in the country and is hailed as "China's most beautiful village" by media comments. 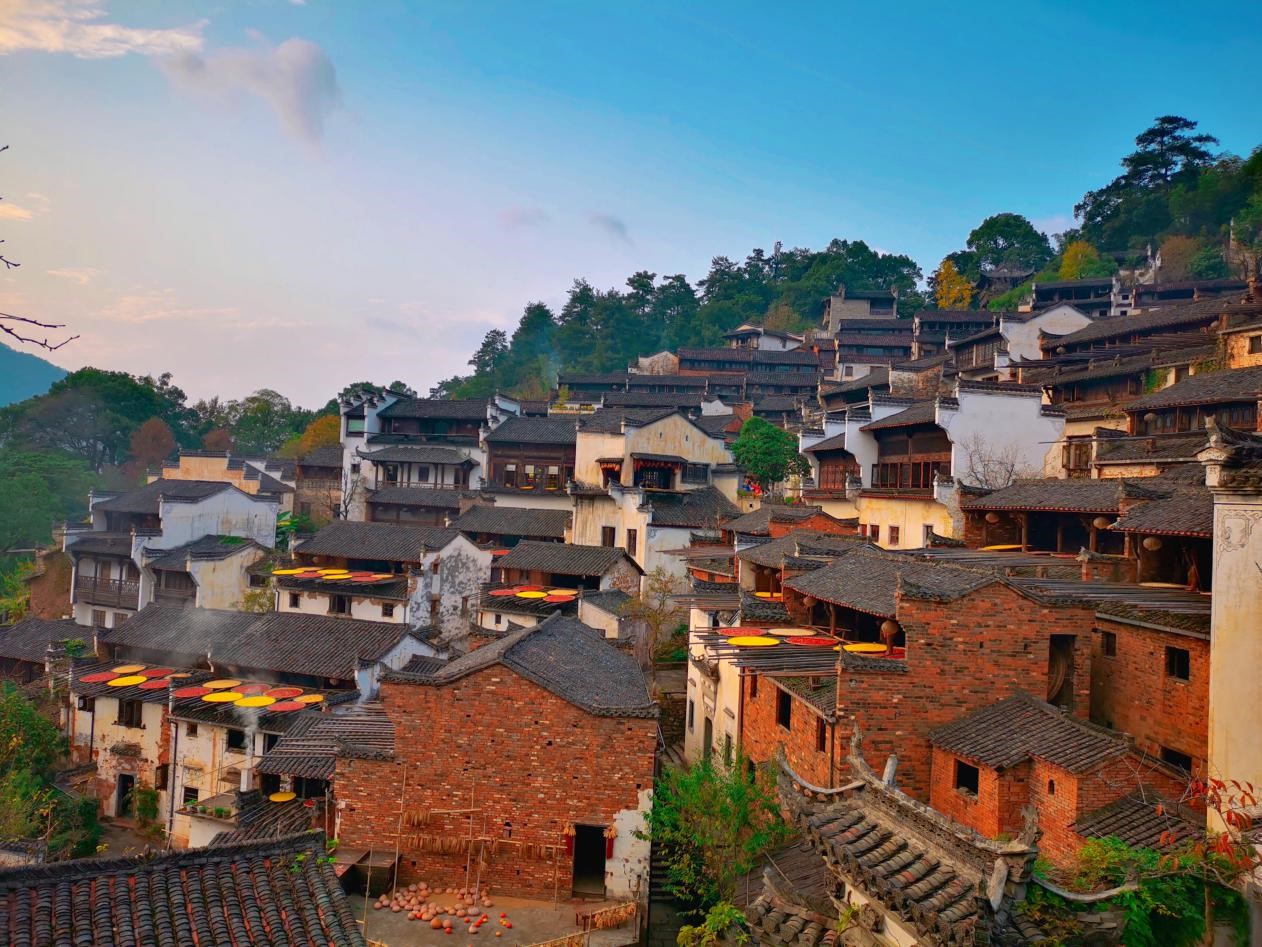 Then we went to eat the authentic Jiangxi cuisine in Wuyuan after a long journey along the way. Jiangxi cuisine has always been famous for its strong taste, which is salty, fresh and spicy. The cooking method of Jiangxi cuisine usually is good at steaming. The people of Jiangxi are good at picking local ingredients and the dishes have a strong local flavor.

Our colleagues who were accustomed to eating light flavors were a bit unbearable during the first meal when they arrived in Jiangxi. Most of us think they were too spicy, and some dishes were afraid to eat, but for those who loved heavy flavors, that was blessed. Chopped pepper fish head, steamed pork ribs, tofu fish head soup, crock pot soup, fried bamboo shoots, fried ground ears with eggs... Even now when I think about those dishes, I still can't help but swallow saliva.

After lunch, we headed to the Yaowan Scenic Area. Yaowan is located in a pit two miles away from Kaoshui Village, surrounded by mountains and flowing streams. 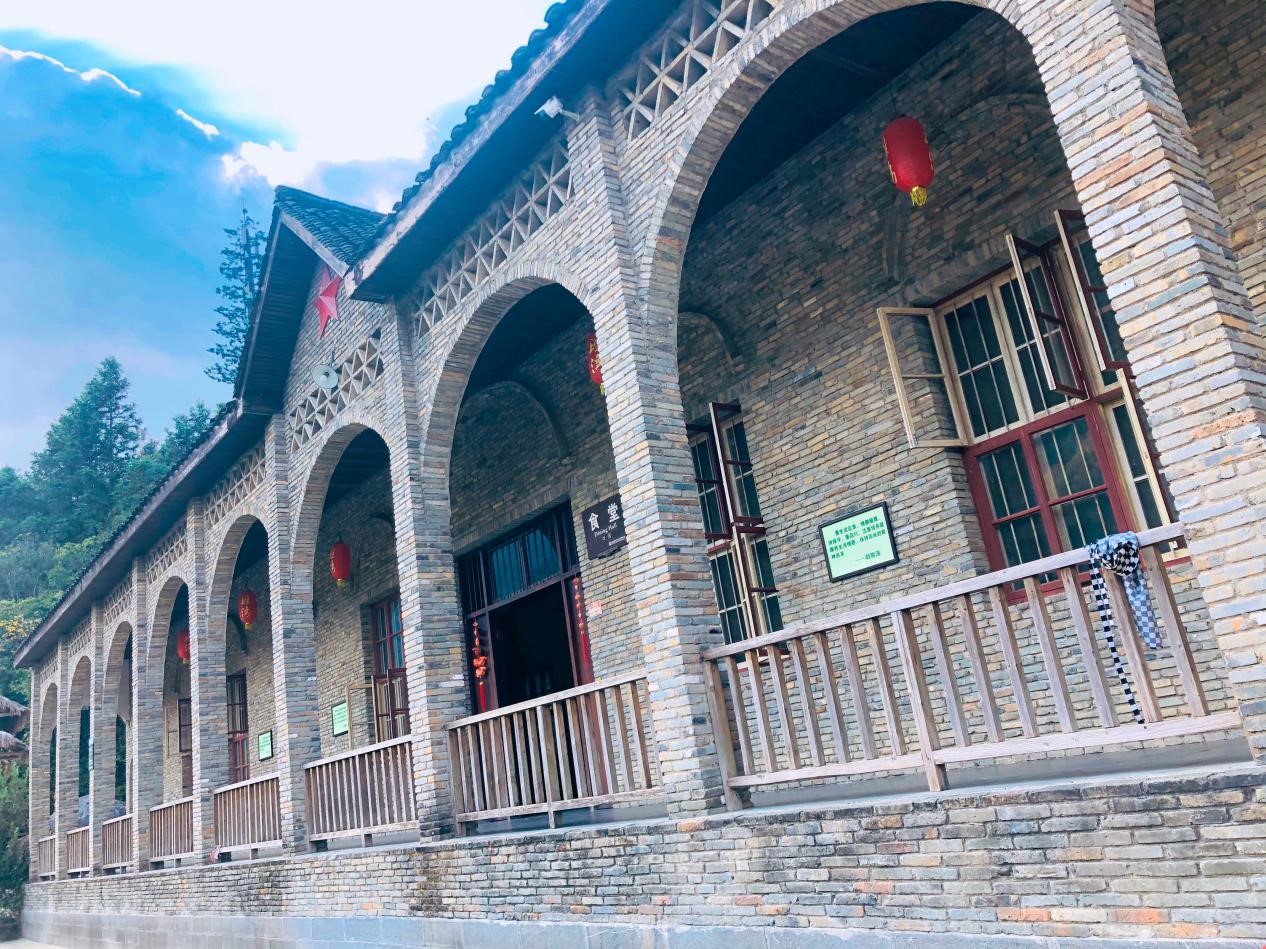 There are breweries, small handicrafts, tea-making, snacks, and private schools at Yaowan. These constructed into the way of life and reproduction of Ming Jing ancestors. There are Jinshidi, Wenchang Pavilion, Junma Tower, all the official residences, and the ancient ancestral hall, Qinfang Academy, Wuxie Songtai, alluding to the legacy and vicissitudes of the Tang Dynasty. 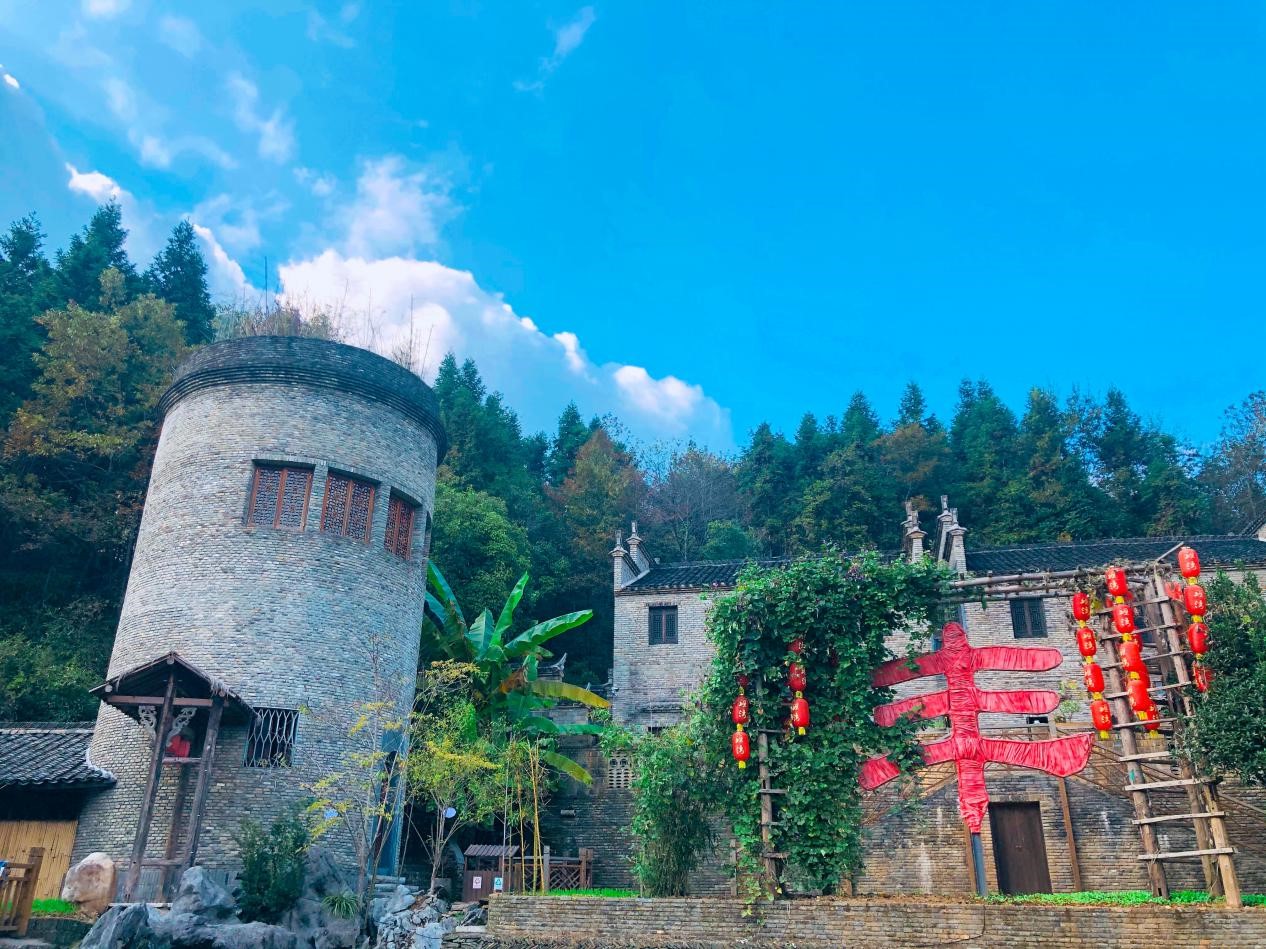 ""Three thousand years of history is nothing more than fame and fortune. Ninety thousand miles of the country are ultimately poetry and wine fields""， Rural life is mostly about strolling on the post roads, sketching photography, farming and picking, ecological food, and enjoying the ""slow country life" in the natural oxygen bar. 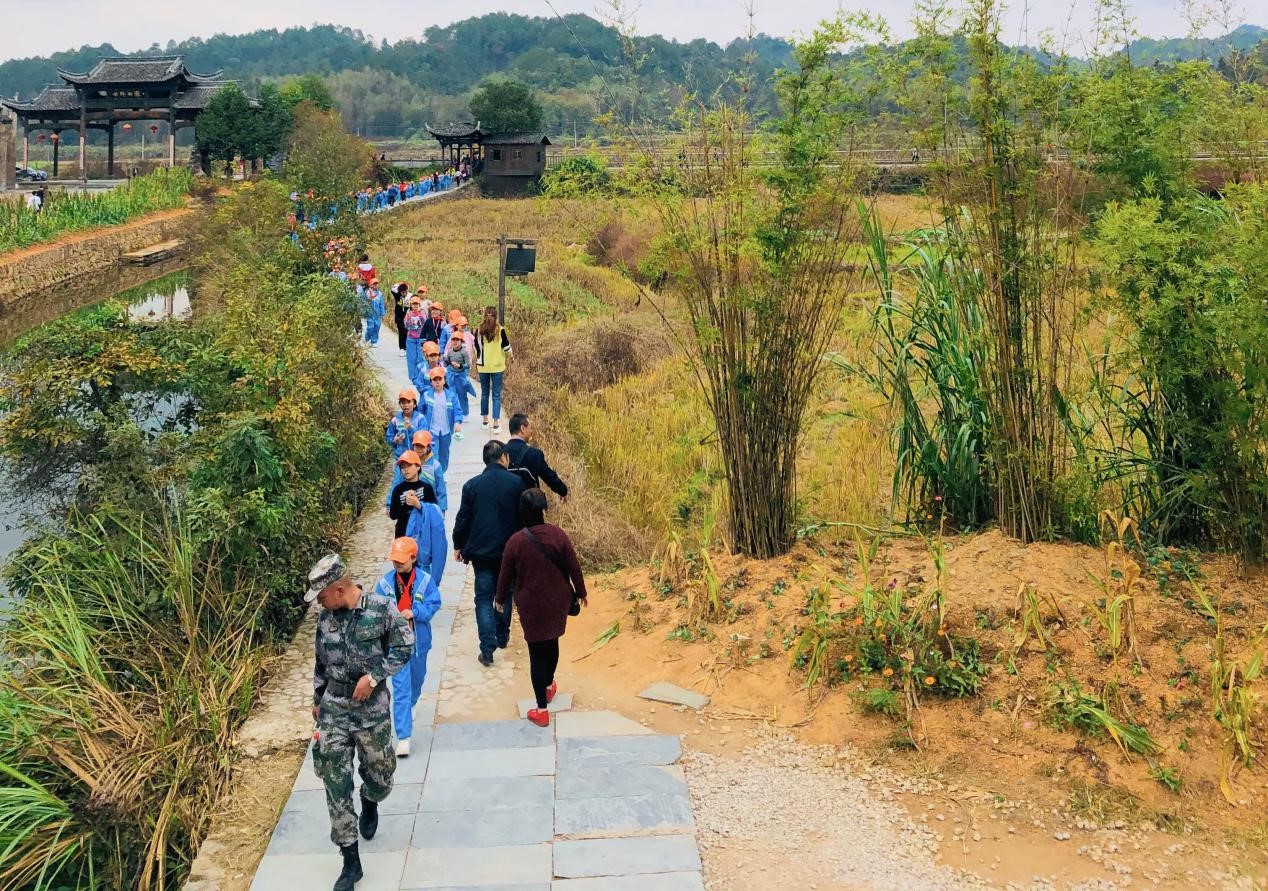 In Yaowan, we ran into a group of children travel there as well. They walked on the ridge in an orderly manner under the leadership of the instructor. They also greeted us now and then enthusiastically. Under the warm greetings from these little cute friends, we then went to Huangling, which was the most beautiful village in China. 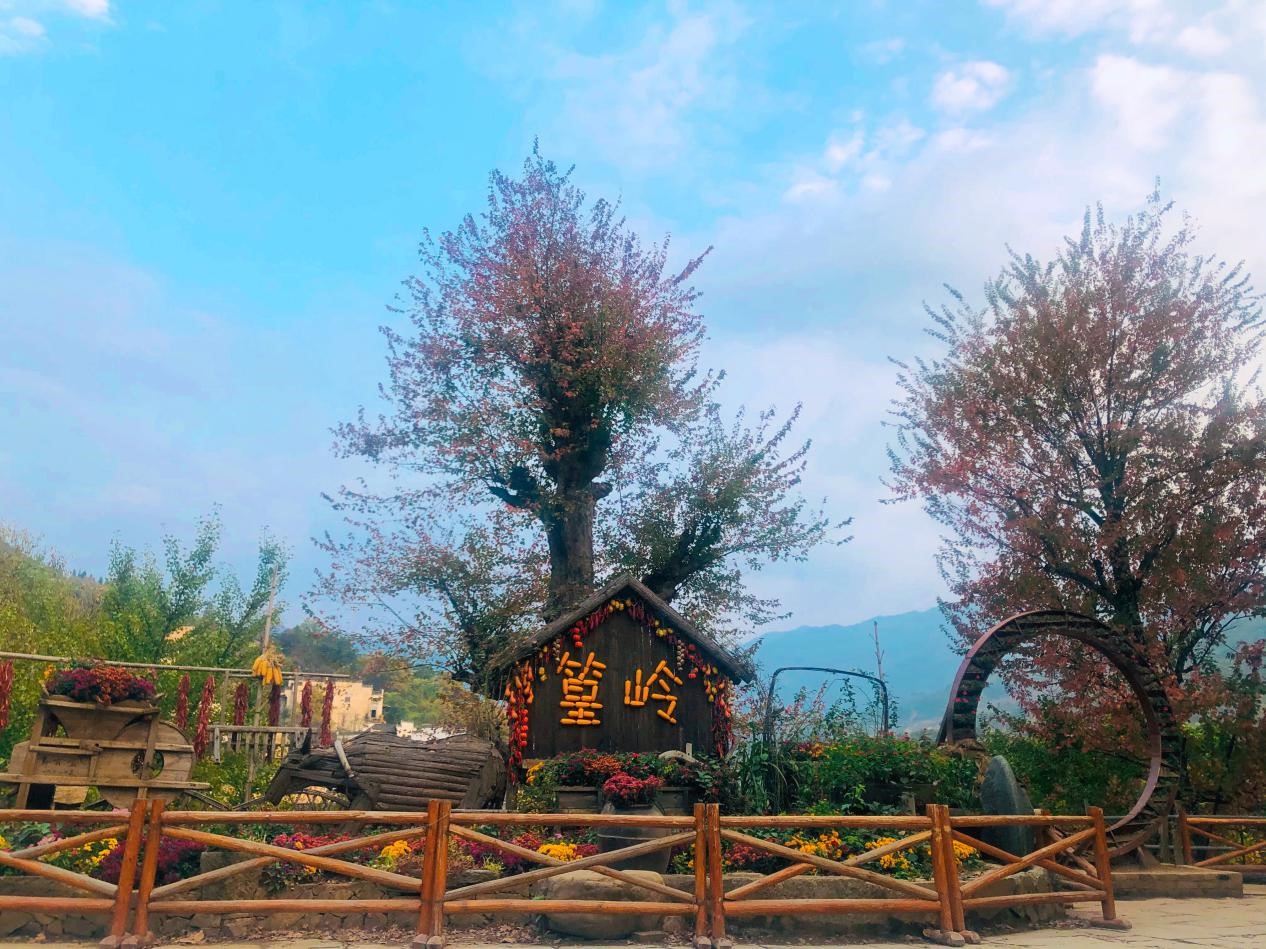 Huangling is located in the northeastern part of Wuyuan County, Shangrao City, Jiangxi Province. It is dominated by classic Huizhou architecture. It is an ancient Huizhou village with a history of nearly 600 years ago. It is also the origin of the famous "Bask in Autumn" culture. Huangling is a typical mountain village, and the dwellings are arranged in fan-shaped ladders around the water outlet. Huangling is famous for its "Bask in autumn" culture. The village "Tianjie" is like a jade belt that connects classic ancient buildings. There are many Hui-style shops, the front shops and the back squares, which resemble a flowing miniature version of the "Qingming Riverside". Surrounded by thousands of ancient trees and ten thousands acres of terraced fields, the sea of flowers displays stunning "land art" in all seasons. The unique travel experience took us on the high-altitude ropeway and overlooked the unique wonders of drying autumn. 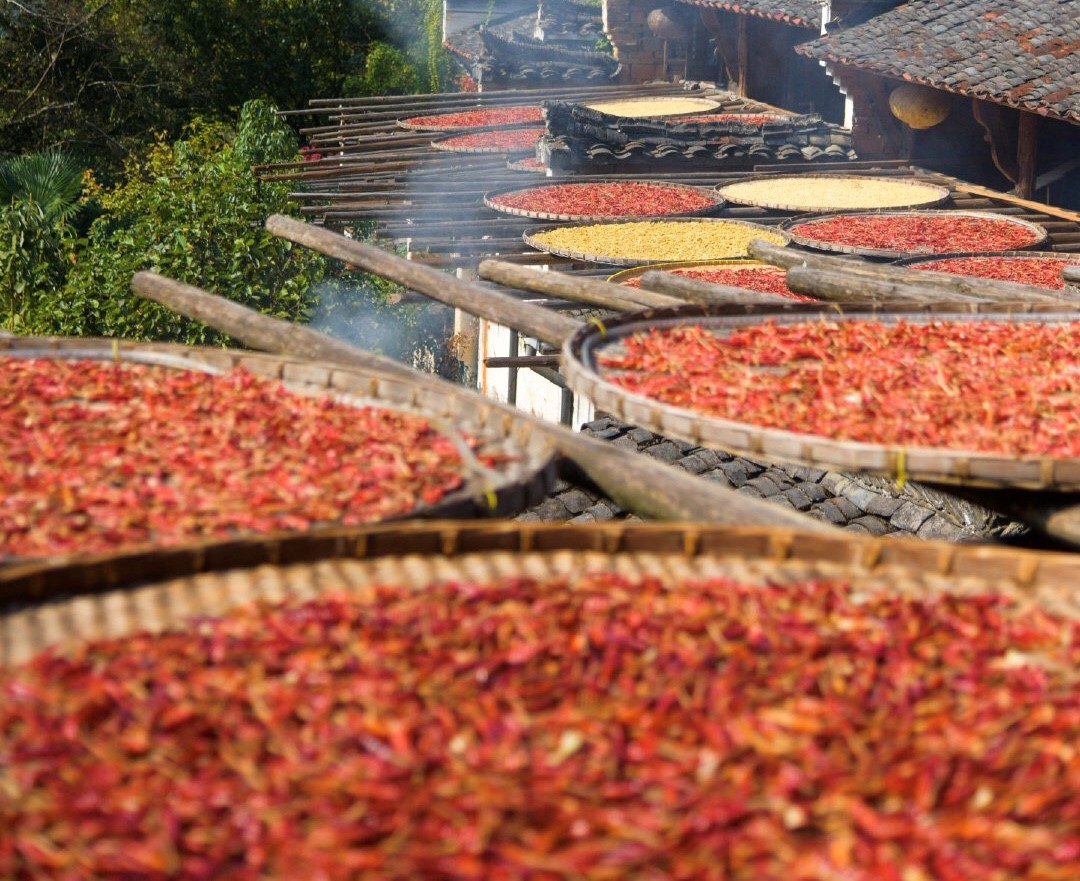 It was almost half night when we arrived in Huangling. Under the arrangement of the company, we stayed in the best hotel in Huangling. After a whole day of fun and walked in the car, veryone was a little tired. We then took a shower in the hotel to relieve the whole day’s tiredness. After dinner, strolling in the small village, we watched the scenes of Huangling at night, which was more lively than Huangling during the day. Our friends were scattered in different places, some drinking and chatting in bars, and som sang in KTV loudly. The night was getting deeper and deeper, and the wine was getting stronger and stronger. The singing gradually disappearred into the night with the moonlight... 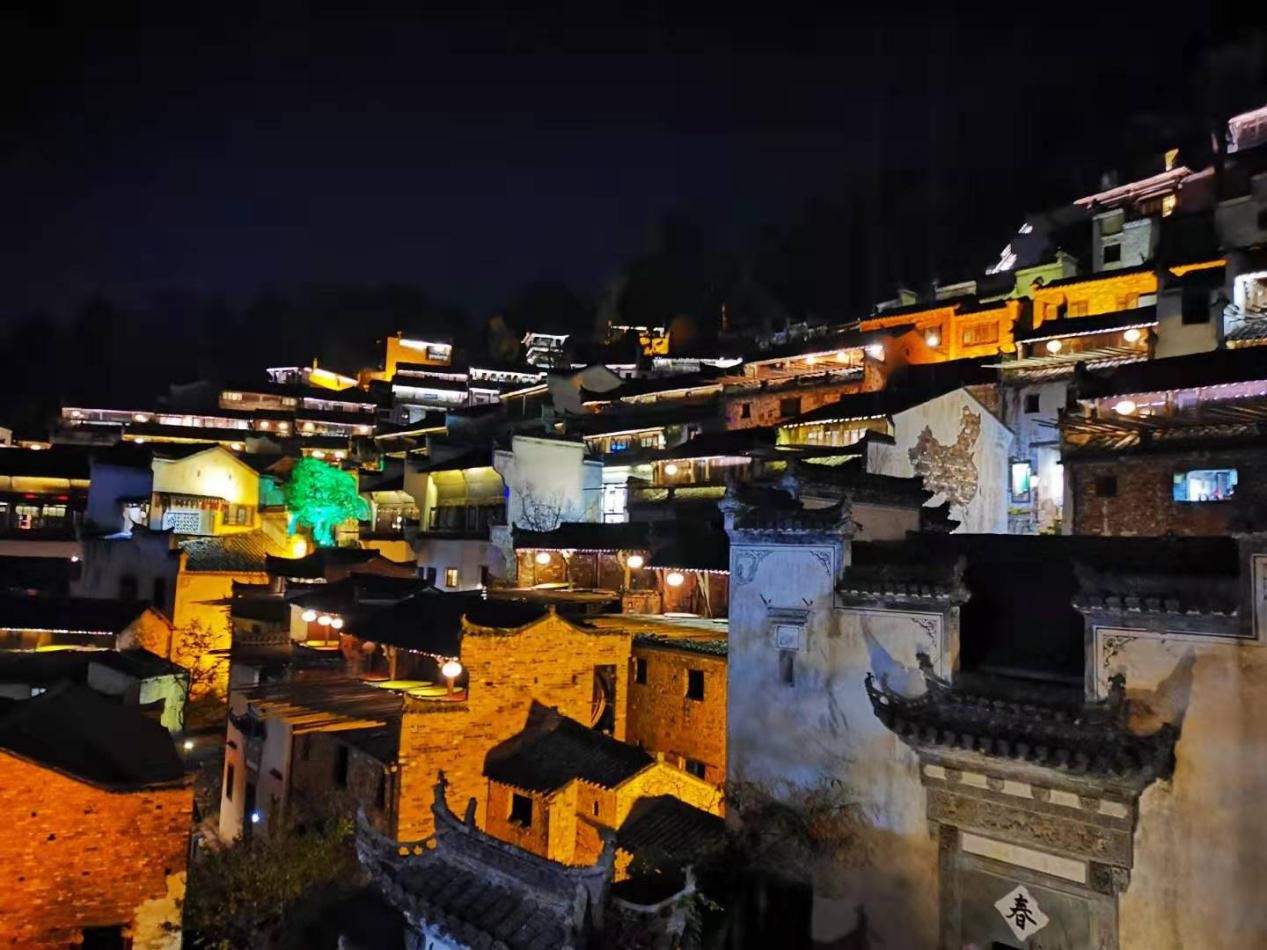 With the smoke wafting from the merchants, the early morning in Huangling was ushered in. In busy Shanghai, I was used to seeing high-rise buildings and heavy traffic. I suddenly felt that the morning in a small mountain village was so peace and grateful. When looking up, green hills covered up the village, looming in the smoke, like a Wonderland in mythological play. Compared with Huangling in the night, Huangling in the early morning was more quiet, less hustle and bustle. The terraced fields in the mountain col were magnificent and tidy. The mottled horse head wall was more ancient under the sunlight in the morning. It seemed that there were many stories about ancient Huizhou merchants once happened in this place.

The story of the small village was coming to an end here. With the memory of Huangling, we embarked on a long trip to Sanqing Mountain. The bus went around in the valley, and the long winding mountain road made people unable to see the end. We finally arrived at the Hilton Hotel before the sunset.

Sanqing Mountain, also known as Shaohua Mountain and Ya Mountain, is a famous Taoist mountain. It is located at the junction of Yushan County and Dexing City, Shangrao City, Jiangxi Province, China. It is named because the three peaks of Yujing, Yuxu and Yuhua are like Taoist gods of Yuqing, Shangqing and Taiqing sitting on the top of the mountain. Among them, Yujing Peak is the highest, with an elevation of 1819.9 meters, which is the fifth highest peak in Jiangxi and the highest peak in the Huaiyu Mountains.

Early in the morning, we marched toward Sanqing Mountain in joys and laughters. Some colleagues had prepared hiking sticks very early. Seeing that everyone had prepared them, others who thought they didn't need a walking stick also bought one. It seemed that the plan of mountain climbing was all counting on it.

As the saying goes, "Sanqing Wonderland is unusual". Today I was looking forward to this "wonderful mountain" especially. After the cable car reached halfway up the mountain, the tour guide told us about some concerns, and then we started today's mountain climbing journey officially. On the cable car platform, it was a vast abyss when looking down, and a clear sky when looking up. The group of us merched toward these steps in the moutain vastly. Some of us were panting tired, while some others didn’t feel tired not at all. The clear blue sky, the overlapping peaks, and the looming rugged plank road formed a beautiful meticulous painting, which was amazing. Countless scenic spots, including “The Goddess Peak”, “The Giant Python Emerges from the Mountain”, “The Monkey King Presents Treasures” were breathtaking. Those attractions were strangely shaped, completely natural, and made us feel the magical work from nature again and again. 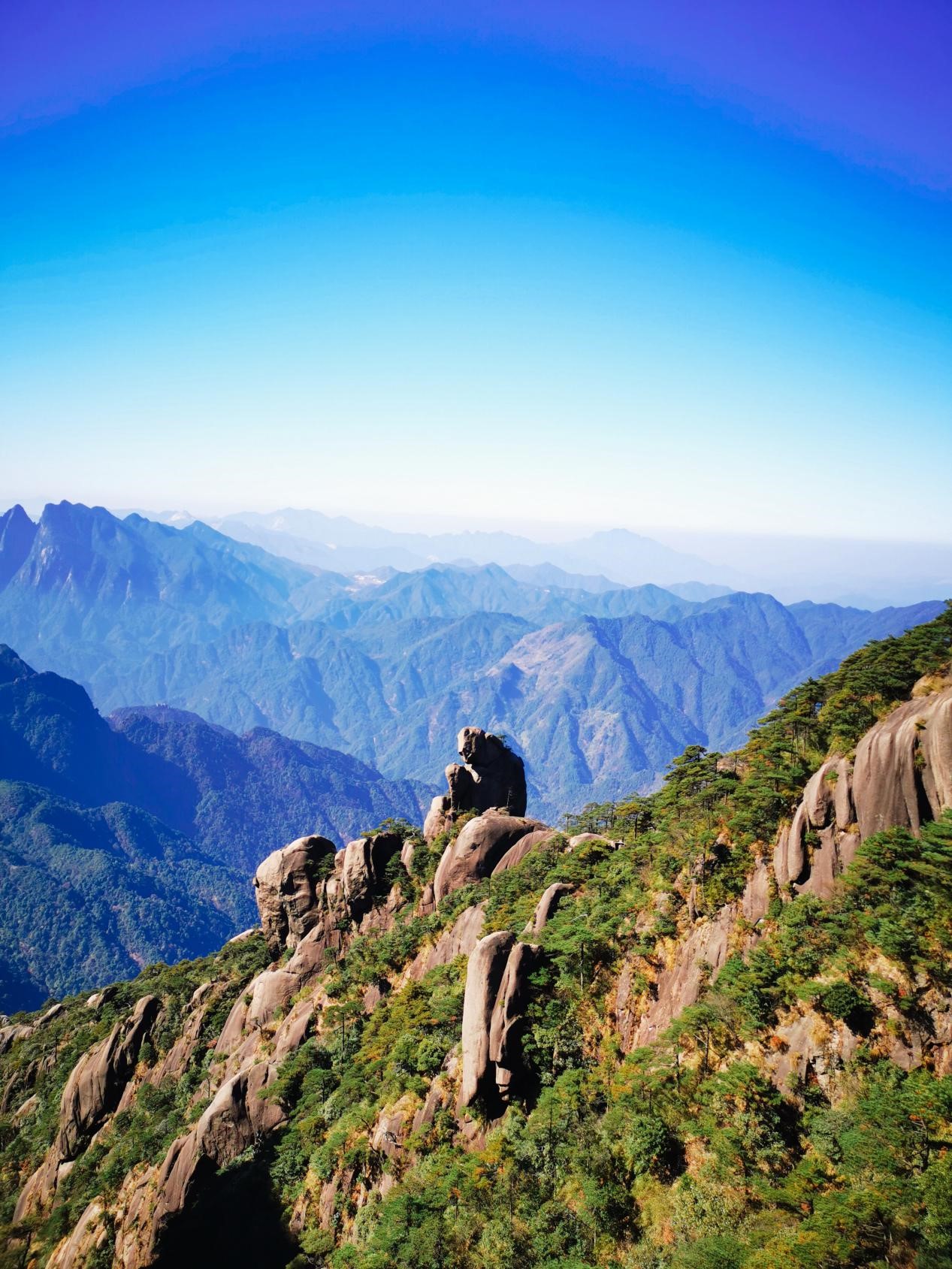 （The Giant Python Emerges from the Mountain）

We laughed and laughed along the way. With snacks and taking pictures, we dissipated the pain of climbing. Thousand-step stairs, rugged mountain roads, and glass plank roads also can't stop our enthusiasm to take pictures. Standing on the glass plank road, we were not timid, and went up to take a souvenir one by one. Here are some beutiful pictures about our mountain climbing. （Our lovely friend from Xinjiang, his name is very nice — Yierxiati） （Photo with goddesses at Goddess Peak） （Hey, you are brave enough and even want to lie down to take pictures, but the photographer is not skilled enough.） （The most beautiful appearences of the ACLS family are here） （The picture of handsome guy Liu） 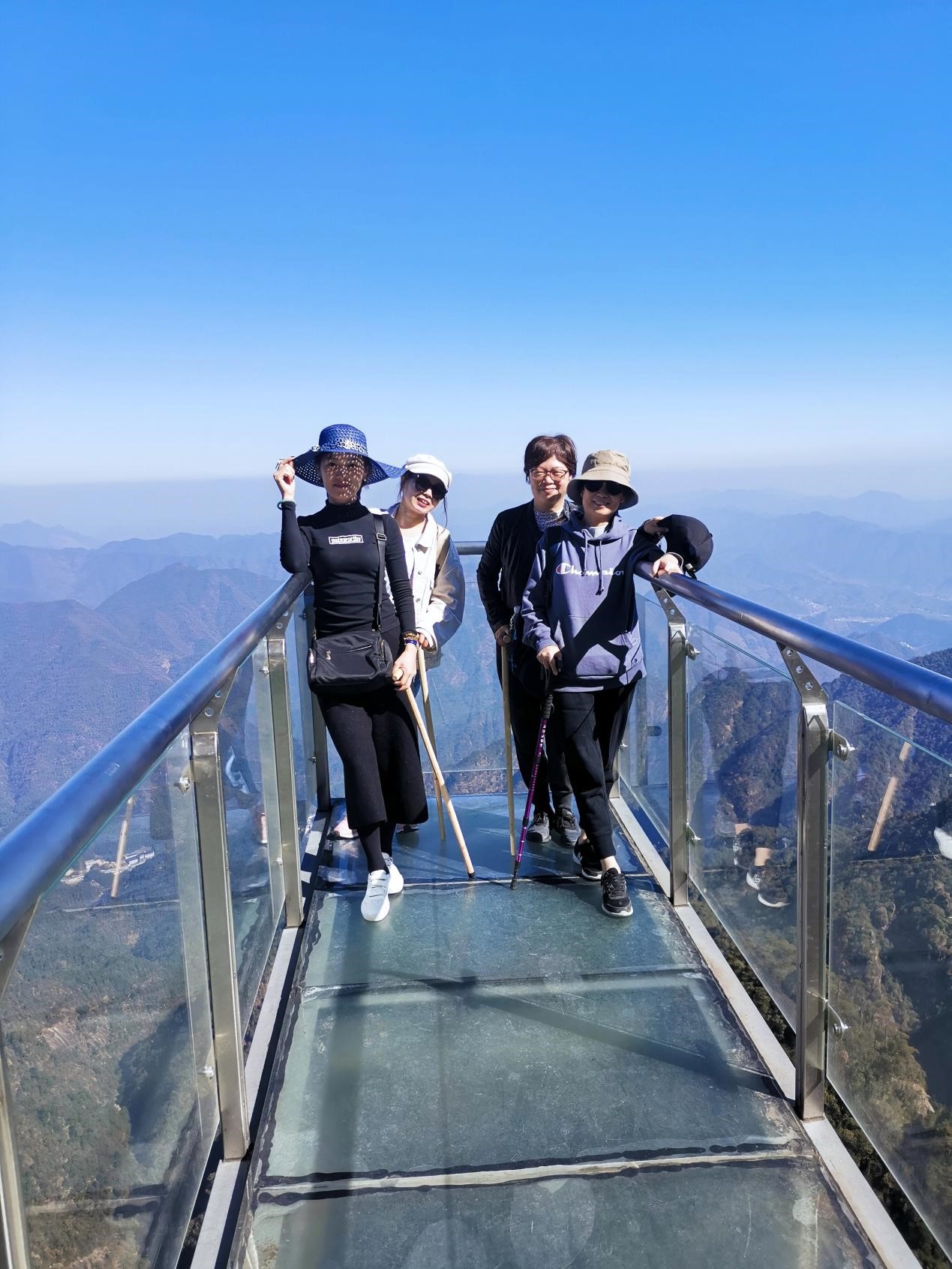 （It is said that fairies are not afraid of heights, is that true?） （The people in the photo are pretty, and the person who took the photo is also pretty）

There are friends in the group constantly sharing with beautiful photos they took along the way. 7 hours have passed without feeling it. Tiredness, sore, and hungry came to us immediately after conquering the mountain and riding the cable car on the return journey. At the foot of the mountain, we were exhausted and even dreamed that there could be any door. We could go back to the hotel and spread out on the bed for a while without wanting to be separated from the bed.

The time spent together with our friends always flies quickly. This journey was coming to an end, and we were embarking on the return journey. We will devote ourselves to daily busy work in Shanghai after go back. Thanks to the company for giving us the valuable chance to understand with each other. Thanks to the company for taking us out to go around, get close to nature, understand about customs, and enjoy this beautiful journey.

During this journey, thanks to the strong support from the company, the laborious arrangement from colleagues, the intimate guidance from the tour guide, and the cooperation among our colleagues are valuable to finish the trip successfully. During the journey, we saw the laughters among our colleagues, and the assistance with each other when climbing the mountain, and the same goal to move forward together. We are a team. We need to put the love of mutual help and determination to move forward in our work. We should not forget our original intention. We believe that this year, we can create a better team than last year. （Don't forget about original intention, and then we can reach archievements.）

Where to go next, we don't know for the time being. But don't forget our original dream, live for now, treature those memories.

Our fantastic trip to Hengdian